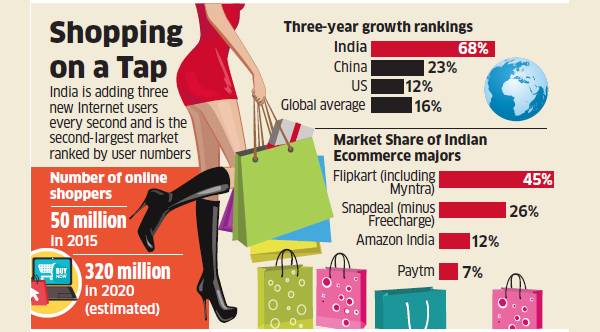 India received $6.6 billion in venture capital and private equity investment in 2015, a 50% increase from the previous year, which probably contributed to a steep growth in the gross merchandise value for ecommerce companies, Morgan Stanley said.   The GMV of the country's top three ecommerce companies exceeded that of the top 10 offline retailers last year, it said. Since the Indian market has huge potential, the opportunities are making "the story compelling for global investors," it said.     The key growth drivers will be greater Internet penetration, a rise in the number of online shoppers and an increase in per capita income.

"We now increase our 2020 estimate (of India's ecommerce market) from $102 billion to $119 billion," Morgan Stanley Research said in a report. "This takes our estimate of the total Indian Internet market size from $137 billion to $159 billion (now including online food aggregation business)."   Morgan Stanley said a global macroeconomic slowdown could affect the flow of VC/PE money into India, thereby slowing GMV growth and lowering valuations.   India is adding three Internet users every second and is already the second-largest Internet market globally in terms of users, according to the report dated February 12.   "We expect Internet penetration to increase from 32% in 2015 to 59% in 2020, translating to a near-doubling of the Internet user base," the US bank said. It estimates India will have almost 320 million online shoppers by 2020 compared with 50 million in 2015.   "Per capita incomes are likely to double by 2025 and this should drive higher aspirations of the Indian consumer," according to the report.   The top three online retail platforms dominated the Indian ecommerce market in 2015 with a combined market share of 83%. Flipkart, including Myntra, maintained its No. 1 position with a 45% market share, followed by Snapdeal (ex-Freecharge) at 26% and Amazon India at 12%. Paytm had a 7% share. At $13.8 billion, the GMV of the top three ecommerce companies exceeded that of the top 10 offline retailers at $12.6 billion last year.